What’s the difference in a Tropical Storm and a Hurricane?

Potato – Potata, right? It’s a massive amount of wind, rain and storm surge, but what are the actual levels that qualify the storms as one or the other? The difference is only 1 mile per hour more of sustained wind at the level from 74mph to 75mph. That’s the quick answer, but there is a lot more to the story than the 1mph marker. Keep reading and you’ll know enough about the measurements to be a grand wizard on Jeopardy 🙂

Way back in 1805, Sir Frances Beaufort came up with Wind Scale that measured things from zero all the way up to Hurricane. Known today as the Beaufort Wind Scale, it measured a range of wind speed in knots, stopping at 64+ for Hurricanes.

The Beaufort scale broke up winds into 12 forces or grades from calm winds up through gale force winds to hurricane strength winds. The 12th grade on the Beaufort scale is “hurricane,” a grade defined by winds of 64 knots or 74 mph at its minimum bound and no maximum bound.

Saffir Simpson gave the Hurricanes a measure above 64 knots, which we refer to as categories 1 through 5 today. The scale is a rating based on a hurricane’s sustained wind speed. This scale estimates potential property damage. Hurricanes reaching Category 3 and higher are considered major hurricanes because of their potential for significant loss of life and damage. Category 1 and 2 storms are still dangerous, however, and require preventative measures. In the western North Pacific, the term “super typhoon” is used for tropical cyclones with sustained winds exceeding 150 mph. Note that all winds are using the U.S. 1-minute average. 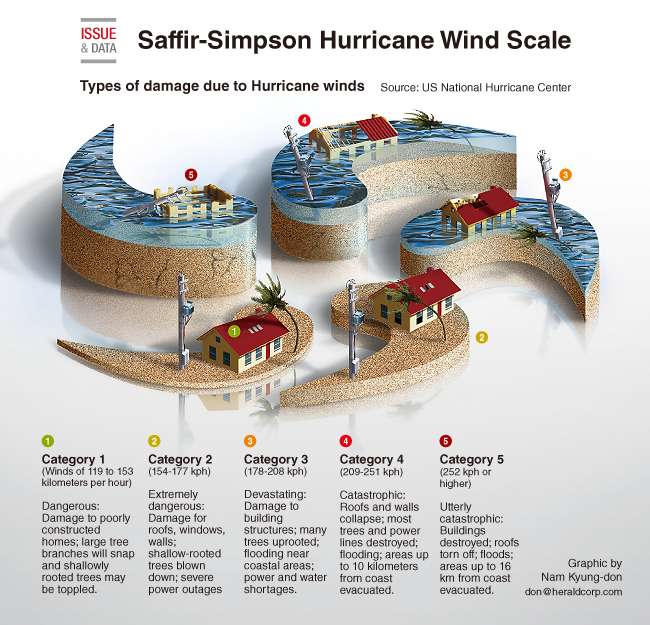 Is Wind the Only Factor?

Good Question! Short answer, No. Wind speed is something we can objectively measure but the amount of rainfall and water consumed while over the ocean, is a different story. Rainfall totals are a function of forward speed rather than tropical storm or hurricane intensity.

Water, in the form of rain, flooding, storm surge, dictate how devastating a storm can be. In terms of the potential flooding it can bring tidal waves up to the height of rooftops in low lying coastal zones. The constant flow of rain can also saturate the ground and flood inland areas.